The Evolution of the Briefcase, From Roman Legionaries to the British “Red Box” 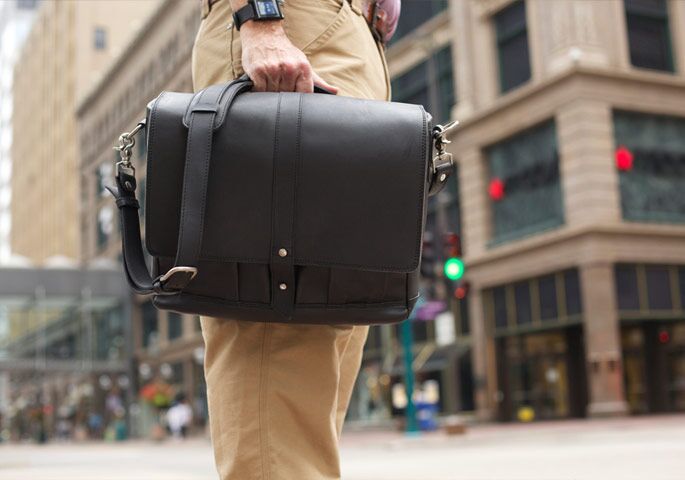 Despite its humble beginnings, the global business bag market has become a behemoth industry in its own right $9.4 billion in sales in 2014. The very word “budget” comes from the same Latin or Irish derivatives for leather bag. Before the 17th-century clothing often didn’t have interior pockets, so bags were an absolute must long before they were a luxury. Business has always necessitated a bag, and the briefcase has long reigned supreme in its domain. So let's take a trip through time to see how the briefcase has evolved: 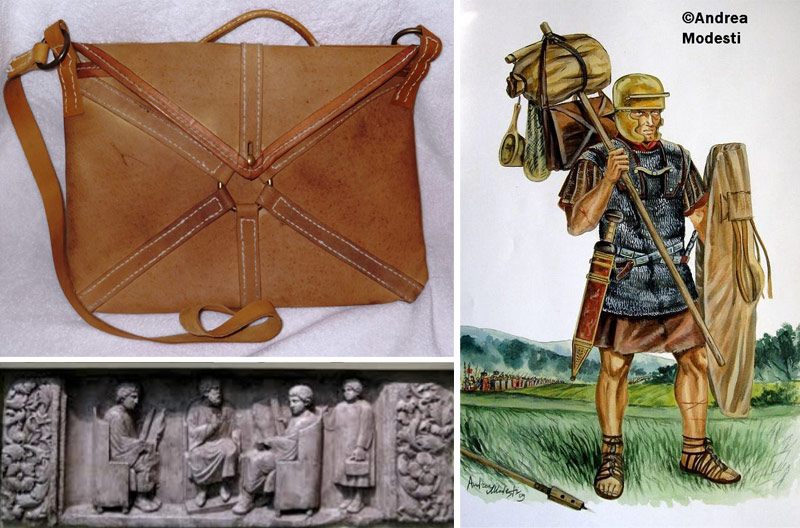 As long as humans have needed to put their stuff somewhere, bags have been in existence, but the closest to the briefcase we can find in human history is the Roman Loculus during the 1st - 3rd centuries. The Roman loculus was usually about 18 by 20 inches, made out of a single goat or calf leather hide, and accented with reinforced diagonal leather straps that met in the center with a bronze ring. This was suspended at the top two corners with two bronze rings and a shoulder strap or bar. Sound familiar? 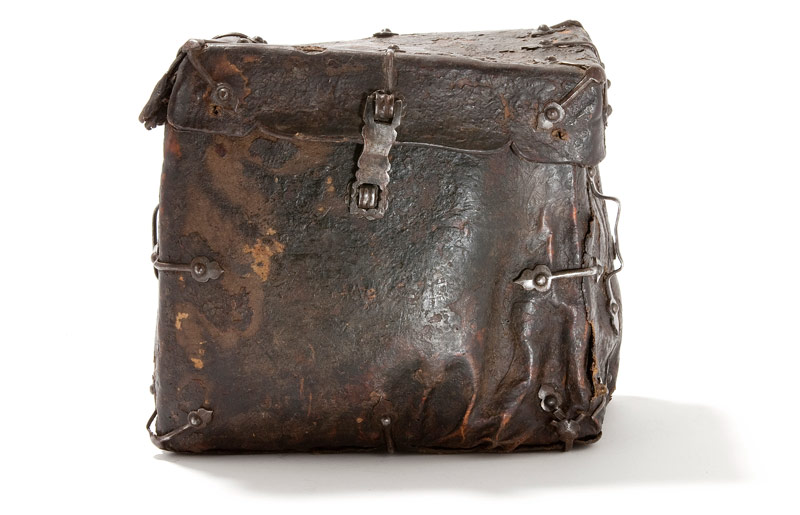 A large jump to the 15th Century takes us to a time when pockets inside clothing still did not commonly exist, so personal effects were kept in bags. Delicate but important items such as documents, letters, books, bibles, and even religious relics had to be particularly well protected. Around 1599, Shakespeare himself gave us an insight into the popularity of satchels in “As You Like It,” describing a “whining school-boy, with his satchel.“ Even schoolchildren were using them.

Shortly thereafter, bag designs began to diversify and proliferate. There were little bags with drawstrings for money, bigger bags with metal clasps, and leather satchels. The fashion at that time was more to wear them on a hip belt of a girdle, with only a few shoulder strap bags in the mix. Leather reigned as the go-to material, due to its durability and availability. Sometimes woven fabrics or precious metals of gold and silver embroidery found a place in the hands of the rich. Time has told us what has lasted the longest, and that is a 16th Century goat skin men’s bag found in the Museum of Bags and Purses in Amsterdam. It was a way for a gentleman of the aristocracy to show off, and hide some things, with 18 secret compartments. It was so well made that it is still around today (third from the right, above picture).

Clothing Pockets and the Down Fall of the Man Purse

Pockets began to be sewn into clothing around the turn of the 17th Century, bringing a wave of convenience that left handbags in the dust. Slowly men began to shed bags and use pockets instead. Bags became a woman’s affair or a luxury bestowed upon the wealthy or royal such as the Silver Bag embossed with the Goddess Victoria on it (pictured above on the left).

During this time period, bags became less a carry-all item, and more an item specific purchase. Bags for brides, bags for games, bags for doctors, bags for alms, bags for everything. They came in all shapes and sizes and were a huge fashion craze. At the same time, women’s clothing was getting fluffier, and more voluminous. So a few bags could be hidden under the dress or attached to the girdle, and that’s how it remained for some time. 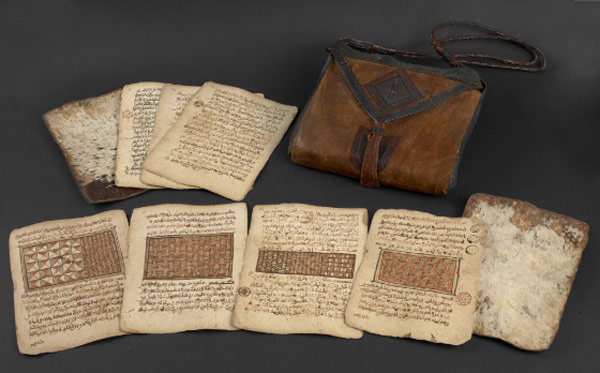 But the briefcase had not floated out of existence at this point. It’s basic form still existed in the letter case. Important or sentimental documents were kept in letter cases, some rugged leather, others ornately decorated.

Soldiers and the Industrial Revolution

Soldiers, when on a tour of duty, by and large were the ones who used shoulder bags. Napoleon era soldiers used a haversack, a bit like a briefcase and a backpack put together. Civil war era soldiers followed suit. A soldier was rarely seen without a bag as part of his ensemble when on tour.

The 19th century saw the Industrial Revolution and thus came new materials for construction. Iron and polished steel, and even paper mache breathed new life into exciting new designs for bags. People became more mobile, traveled more often and farther, and needed bags that suited their needs. Many worked out intricate embroidery, even by hand themselves, since embroidery was a prerequisite for women of class. They worked these into the bag and sent them to their local leather workman to pull it together with leather corners, a metal clasp, and of course, handles. Handles were making their comeback.

Hand bags, or carrier bags, rushed into popularity. They were practical, versatile, and looked great. Train travel demanded that bags be sturdy. Etiquette demanded they be fashionable. Thus, the Golden Age of leather handbags dawned. The upper class saw briefcase like bags appear with gentleman traveling and became even more common amongst doctors and the working white collar class of lawyers or barristers on both sides of the pond.

Bureaucracy, the British, and the Swinging 60s

Briefcases found a real foothold in the bureaucracy of the British. Barrow and Gale is a privately held limited company that was founded in 1750. They are the makers of the infamous “Red Briefcase” that hold the British budget papers annually on Budget Day since 1860 until it was retired in a delicate condition in 2010. To this day, the company is known for its superb discretion and does not even list a street address for the business. Don’t believe that? Just look at their website here.

India, under British rule, followed suit using a red briefcase for its budget day equivalent. The world saw the briefcase become the battle flag of the government worker, the salesman, and the serious minded entrepreneur. It became an adult male’s right of passage. Even school children of the 50s and 60s had a leather satchel to carry to school. The satchel and the briefcase were top dog.

As styles got looser and wilder in the 60s and 70s, a structured square edged briefcase began to look, well, square. Major designers took over the fashion scene with unprecedented power. Yves Saint Laurent, Pierre Cardin, Mary Quant offered up styles that skewed the status quo. Younger people reached for things with more personal style appeal, and they shied away from the traditional briefcase look. But the briefcase didn’t die. Its age group of users just got older.

The late 80s saw the boom of must-have designer labels. Prada and Gucci started popping out sleek, refined black leather bags that oozed success and class. That was soon followed by many others behemoths of successful branding in the bag industry: Louis Vuitton, Dolce & Golbana, Hermes, Chanel, and others. Many of these had found success in earlier years but roared to larger-than-life size in these decades. Bags were more popular than ever, just not briefcases. Briefcases were your dad’s bag, not your bag.

Shortly after that, celebrity endorsement began to influence what was considered hot that season like never before. And it continues through today, thus pointing out a definite paradigm shift in bag purchases. They became less about function and more about personal statements. A Hermes Berkin bag identifies you among an echelon of rich and stylish. A rugged but affordable Fossil bag lands you in a whole other group of identifiers.

The Age of the Modern Briefcase

Bags speak. And the briefcase today makes a statement: Power. Briefcases today bespeak power, education, and opportunity. Like a good suit, the look makes the man.

Most business people are carrying less paper than ever before. Tablets, smartphones, and USB drives are taking the space of what was once a necessary-to-carry load of endless papers. To appear relevant, many are moving away from bulky paper-based operations, and into portable electronics. A sleek tablet, with all the right apps, streamlines many business interactions and leaves a good impression with clients and customers. This has shrunk the typical size of an 'every-man' briefcase. Remember the days of the built-in calculator coming with a briefcase? That’s a joke we tell our kids now. Slim is in.

Feeling freed up on space, many successful businessmen are eschewing the brand-name high-end black leather briefcase of the moment, for something that more closely matches their personality beyond the office. Slim, modern, and durable briefcases that have a rugged edge to them or a vintage look are an acceptable part of a business ensemble.

Personal expression is often part of what makes a brand, be it a company’s or personal brand, and that is not shied away from. There even seems to be a hearkening to the 40s era of hand stitched, quality leather bags. Indiana Jones was a Professor after all, so why not use the same bag he did? That certainly seems to be the trend in briefcases these days.

The briefcase of today is not your grandfather’s briefcase or your ancestor’s for that matter. It is a culmination of years of trends waxing and waning, of societal expectations evolving, and of globalization and personalization. Today’s briefcase is slim, it fits your personality, and it has an incredible history behind it.

TL;DR- A Brief History Of The Briefcase: