Mr. PQ has always been quite the fashion guru, his wardrobe giving render to the colorful spectrum of his personality.  So, when Apple announced the release of Apple Watch he knew he must have one and he knew it needed to be accessorized with an ample array of Apple watch bands.  Not unlike the Swatch Watch phenomenon of the ‘80’s, Mr. PQ would like nothing better then to sport 5 or 6 Apple Watches on his wrist, each with a unique band, although his simple sophistication mandates he wear only one watch at a time.

Problematically, once he acquired the gorgeous Milanese Loop and the Stainless Steel Link band (claiming business expense...), in addition to the black Sport Band that accompanied his original purchase, he felt he had run into a dead end.  Being all about full grain leather and artisan design, sadly, the Apple leather band offerings did not rise to his level of discriminating taste.  Thankfully, his hopes and dreams were not to be dashed upon the rubbage pile of knock offs and inferior craftsmanship, because we know artisans trained in the art of Italian Leather craft. So we turned to Victorio, a 4th generation Italian leather tannery artisan who uses  legendary soft-tumbled method to transform full grain American Steer hides into a luxury leather watch band that will hug your wrist with pliable comfort, while being as rugged and durable as your active life demands. 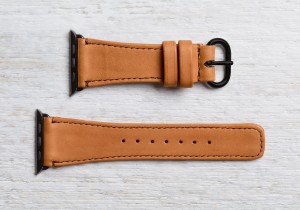 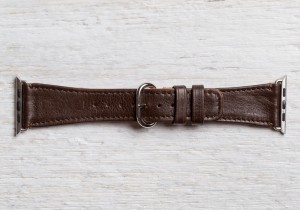 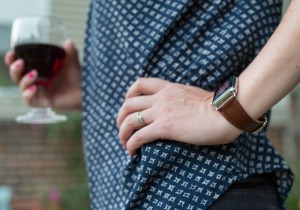 The mark of a fine leather watch band is that in short time you no longer notice its existence.  No pinching, no rubbing, the Pad & Quill leather Apple Watch bands will love your wrist as much as you love your watch.