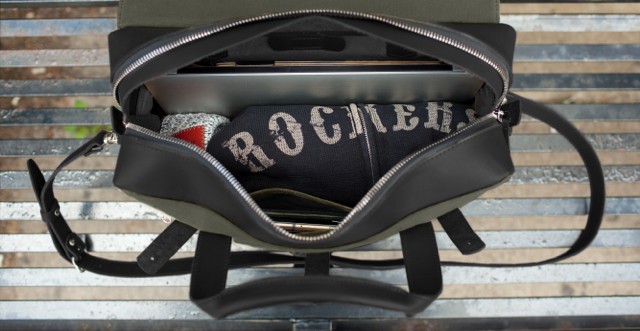 Mr. PQ was busy becoming a major radio star the other evening but I had no idea what his topic was to be, I wasn’t allowed to be at the PQ World Headquarters while he was participating in 9to5Mac’s weekly podcast.  This has nothing to do with the fact that the FIFA Women’s World Cup is competing in Canada this month.  My exclusion from the taping also clearly has nothing to do with my propensity to scream insanely at the television when a goal is scored or mutter incoherently at the oops-I-fell-so-clearly-Christie Rampone-knocked me-over smathlete.   Who am I kidding?  When it comes to world-class soccer, I revert to my 18-year-old Colorado self; this would be the self, weaned on Bronco football, who lived in the mile high city where exuberant cheering is an art form.

Art forms have been a significant point of conversation in the PQ household, or at least this is how Mr. PQ asserted his claim that surely the best way to be motivated to create world class backpacks and briefcases for Pad & Quill, was that he be fully immersed in the artful, gritty, urban world of the Café Racer.  To do so meant purchasing an artistically rich cafe racer motorcycle, specifically, a Triumph, preferably a Thruxton.  He appealed to my accounting side: “it’s a great tax write-off”.   Sorry babe, the IRS won’t see it that way.  He appealed to my affection for history: “Mom is English, it would tie me to my heritage.”  Honey, scones and tea would do the same but I don’t see you clamoring for them.   He appealed to my sense of nostalgia: “Steve McQueen and Anne Margaret rocked the Triumph in iconic photos and movie shots”. Me, having a lifelong love for Anne Margaret wavered. 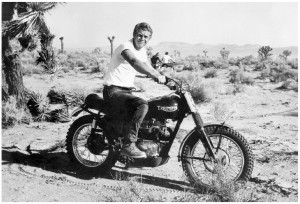 Once Mrs. PQ wavers, it’s not terribly hard to push her over.  Especially when the one pushing has worked 70-80 hours a week, month after month, year after year, putting food on the table and a roof over our heads.  There are people who might view Mr. PQ’s new bike as a mid-life crisis, I’d say it’s a ride well earned by a guy who’s taken loyalty and devotion to an art form.