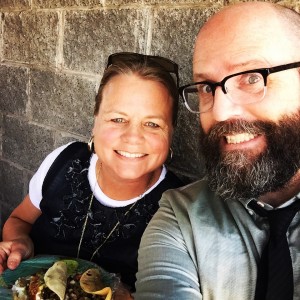 Most folks are familiar with the phrase, “when in Rome do as the Romans do.”  While on this trip to visit our friends and manufacturing partners in Leon Guanojuanto Mexico I learned a new phrase, “a donde fueras,  haz lo que vieres”.  A loose translation of this old spanish saying is, “where you go, do what you see”.  A donde fueras, haz lo que vieres in Leon means eating quesedillas under a makeshift tarpelin tent and paying scant attention to the bubbling pot from which the meat is pulled, (I’m not certain but I think I saw an eye wink at me).  Most delicious street food I’ve encountered, and a Mr. PQ favorite.  He wants me to make this comida at home, but I’m reasonably certain this feat can’t be replicated in the United States, because it’s not just the ingredients.  It’s the hot desert air and the cool shade of the tarp, it’s the seasoning of a griddle that’s achieved by thousands of quesadillas passing over it and being cleaned exclusively by a quick scrape.  It’s rumble of diesel trucks passing through the manufacturing district and banter of uniformed children walking home for a mid day meal, which happens to occur around 2, a phenomenon, to which I could grow accustomed.  An hour break in the afternoon to slow down, eat, rest, breathe, then you reconvene for dinner around 8.  I explained to Alvaro, our designer of leather iPhone wallet cases, we eat supper around 5:30 or 6.  He was mystified how we could go 12 hours sin comida (without eating).  I’ve never given it a second thought but I’d guess the practice evolved from farming life where supper, bedding down and rising up were all characterized by “early”.  Alvaro and Mr. PQ have been busy with iWatch accessory designs and we think you will enjoy what we are doing with Italian design, luxury leather and regional hardwoods.

A donde fueras… When in Iowa, do as the Iowans do.  This would include consumption of corn and tater tot hot dish.  It would also include working with Jason who is taking the concept of bumper case for iPhone to a resplendently natural level with beautifully crafted hardwood. Those details will be emerging soon!

When at Old Mexico do as the Old Mexicans do, but we covered that in the first paragraph.  What we can’t wait to uncover is what Alex has been up to in designing a new line of leather and wax canvas bags, backpacks and accessories, can’t divulge too much more but suffice to say it will be a 'Triumph' of bag goodness.

When in St. Paul… you stop in at the greasy, hole-the-wall, rail car diner, Chris and Rob’s and have hot dogs that are stadium good, to die for, dogs.  No one should watch how sausage is made, but it is pretty fascinating to watch our bookbindery staff craft our moleskin journal iPad, iPhone and Macbook Air cases.  Tom and Mr. PQ are designing a fairly well indestructible case that will release later this year as well.

Now I'm off to ask Mr PQ what the over/under is that I will be unable to figure out my Apple Watch in the first week of having in on my wrist.