I found myself out of town essentially every weekend in September and October largely due to travel with the high school coed mountain bike team and travel to Superior Hiking Trail Association trail clearing weekends.  I'd return Sunday evenings, worn but refreshed from days spent in the fall sunshine, trampling through the woods to cheer or chop, Sherpa or shovel, replete with stories of new acquaintances made and old friendships rekindled.

At first, Mr PQ held down the home front with the usual grace he affords my little weekend outings, generally teachings the boys to be manly men with hot wing challenges and late night video game duals. But, by about the third week of September, I noticed a subtle change. At first it was things, like a shipment of pine scented beard oil landing on our front door step from CanYouHandleBar. What? He said it was a market research product from a company with which we are loosely affiliated. Then, a parcel from Duluth Trading Company arrived holding a snuggle worthy flannel shirt. No complaints here, but Mr PQ is generally more a Banana Republic guy. Weekend after weekend passed and a subtle suspicion began to creep into the back of my mind. More parcels from Duluth Trading, more beard-care products. Mr PQ whistling off to work, his Red Wing leather boots tromping off into the frost covered world, most assuredly up to something. Twenty five years of faithfulness and respect toward our marriage had me assured that it wasn't another woman, but clearly something was going on in the recesses of that man's brain.

Whoever said "Absence makes the heart grow fonder" forgot to mention that it also makes the "id" go crazy. I was beginning to fear that with no Mrs PQ around during the non-work weekend hours Mr PQ was slipping into a plaid shirt induced psychosis. It was time for a confrontation. I awoke Sunday morning, a fire crackling in the stove, Mr PQ pipe in hand, reading on the sofa, ultimately confirming my worse fears. It was the matching plaid shirt on top of another plaid shirt that gave him away.

What screamed through my mind came out as a mere whisper of accusation. 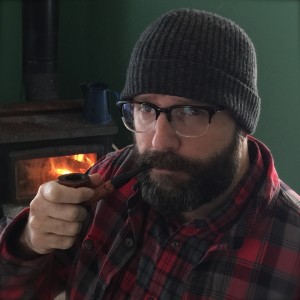 But back to Mr PQ. Yes, the man has turned into a complete Lumbersexual. Including his own Instagram account he just started.  If you don't believe me, read some of the rules he's devised, and try to dispute the facts. Here are a few of his new 'Rules of a Lumbersexual'.

1. You oil the beard, never moisturize the face.

2. Flannel is not merely acceptable, it's expected

3. The only time plaid is not worn is when wearing a suit, tie and cafe racer motorcycle #gentlemansride

Personally, I don't mind, I've always liked a man who could swing a big axe.