iPad Pro 9.7 Review- This Is The iPad You Were Looking For 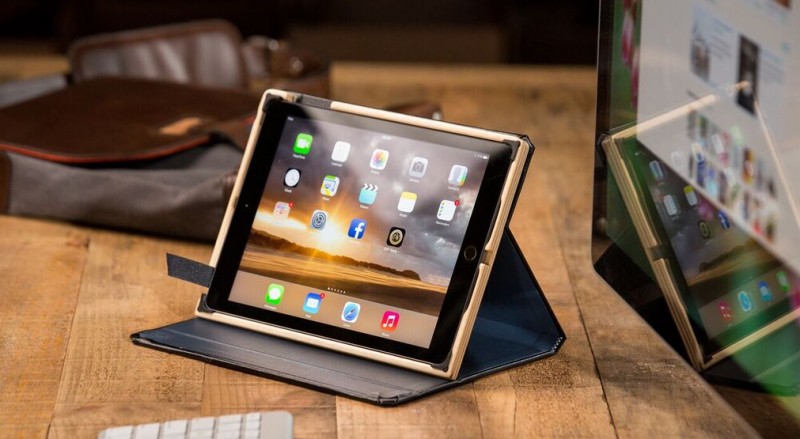 The iPad has long been a favorite device here at PQ headquarters. It is the tablet that launched our company, and it remains near and dear to our heart down to this day. When the first iPad Pro came out, we pulled out all the stops and decided to use the new 12.9" tablet as our primary computing device for running the company as an experiment. It went reasonably well. So when the iPad Pro 9.7 came out, we decided to try the same thing.

With their newest tablet, Apple is aiming to appeal to 2 different customer sets at the same time. On the one hand, they want to entice previous generation iPad owners to upgrade to the newest version. On the other hand, they are trying to appeal to the desktop and laptop users, specifically PC users, in order to get them to use an iPad as their primary computing device. By giving it the 'Pro' moniker, it is also indicitive that they want this device to appeal to a professional user base as well. On some fronts, they have succeeded with flying colors. However, there is still some room for iOS to grow. Read on for our full review of the iPad Pro 9.7.

Internal Components Largely Upgraded. If you have an old iPad Air and have been waiting to upgrade, this is indeed the tablet you have been looking for. From the inside out, every part of the iPad has been improved. The guts of the iPad feature an A9X chip, the same that is used in its 12.9" sibling. This chip is a little underclocked, though, but it probably all balances out in the end since the smaller screen is pushing fewer pixels than the iPad Pro 12.9". The internal 2GB of RAM is more than enough to handle multiple tabs of internet browsing and split screen work.

Fantastic Camera. The new 4K camera is the exact same as Apple's top-of-the-line camera as featured in the iPhone 6S Plus. It has fantastic resolution, takes great photos in low-light settings, and even comes with Optical Image Stabilization, although Apple has chosen not to highlight this feature for some reason. Granted, the size of the tablet doesn't lend itself to point-and-shoot photography like the iPhone does. However, it is certainly more usable than the 12.9" version which is unwieldy at best. It also comes in quite handy when scanning documents, shooting photos for conferences, and numerous other uses. We plan to use it a good deal for shooting work related images and sending photos back and forth in the office.

4 Stereo Smart Speakers. The speakers are just beastly for a tablet. 4 stereo speaker ports mean you can now hear the sound no matter where you are sitting. And the speakers are "smart" too, in that they know the orientation of your tablet and always shoot out the higher treble sounds from the top and the lower bass from the bottom. It's amazing they were able to pack this much audio power into such a small package. Truly a step up from the iPad Air and iPad Mini. 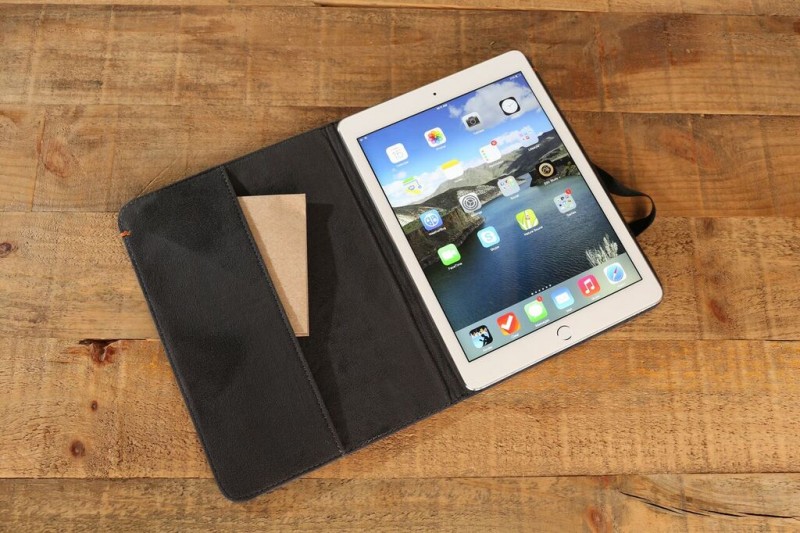 The Beautiful Display. It is the amazing display, though, where the new iPad Pro 9.7 really shines. Literally. 25% brighter than the iPad Air 2, a wider, deeper color gamut, 40% less reflective than the Air 2, and the snazzy 'paper-white' feature that allows the screen's color tones to adapt to ambient light via light sensors embedded in the bezzle. Any one of these upgrades, on their own, aren't that big of a deal, but together they make the iPad Pro 9.7" screen the best we have ever seen. Also, it may seem silly, but the reach on a the 12.9" screen can get irksome at times. When typing on the smart keyboard, reaching all the on-screen buttons in the various corners can be quite annoying. The 9.7" screen solves this little problem nicely and everything is easily accessible and quickly reachable without having to lift your whole arm off the table. 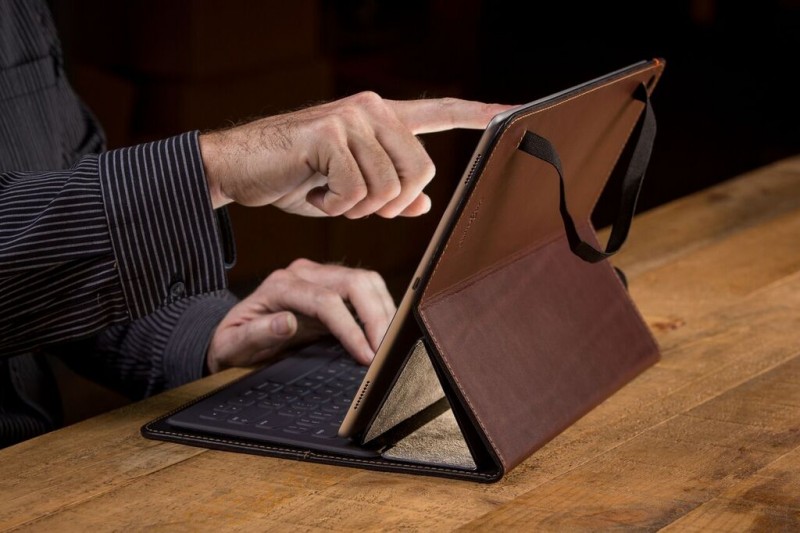 Easy and Convenient Smart Keyboard. And then there are the accessories. The Smart Keyboard is fantastic, connecting automatically to the iPad's Smart Connector port and working seamlessly with all typing apps. It feels great too, which is a major reason we made sure our iPad Pro 9.7 cases like the Oxford and the Contega Thin would be compatible with it. 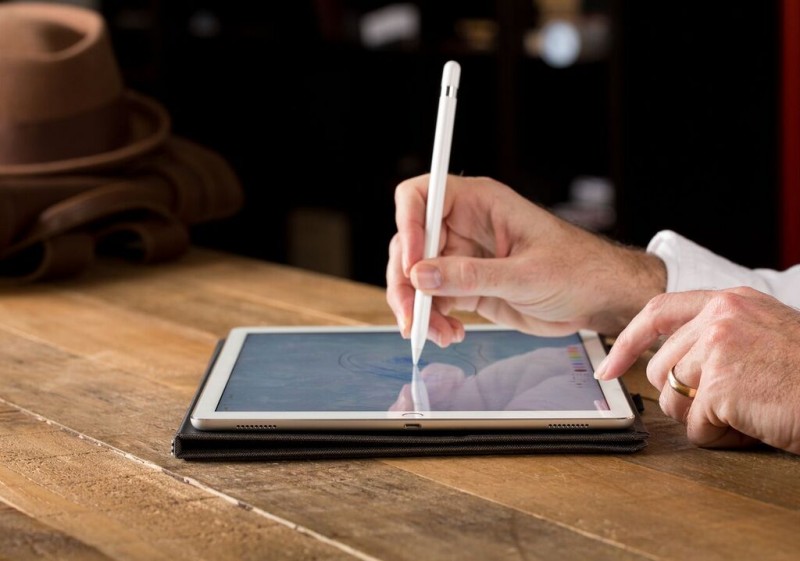 Fantastic Apple Pencil. The accessory that really shines is the Apple Pencil. Possibly this one feature alone is enough to get many to upgrade. It is truly a delight to use, especially for designers and artists. It works great for taking notes and sketching ideas and turns the iPad Pro 9.7 into even more of a creative dream come true. Our product design and marketing team love this new feature with all their hearts.

All these features add up to one amazing little tablet. Throw in an upgraded front-facing camera, true-tone flash, and a rose gold option, and you've got yourself the best iPad yet.

2GB Ram. The 12.9" iPad Pro comes with 4GB of ram while the 9.7" only has 2GB of ram. This is the same as what is in the iPad Air 2. As noted by 9to5Mac, 2GB really has been the sweet spot for Apple devices and the vast majority of users will probably never notice the difference other than professional users who are editing multiple streams of 4k video or doing super heavy-duty computing tasks.

USB 2.0. The iPad Pro 9.7 only has USB 2.0 capabilities, meaning it takes a good deal longer to transfer files than it does with the 12.9" version. This is indeed a disappointment for professional photographers and videographers who need fast speeds to move large amounts of data quickly.

Smaller Screen. The iPad's 9.7" screen is much more useful than a Mini, but obviously not quite as big as the 12.9. In most cases, this isn't a big deal, it is crisp enough that most split-screen tasks work just fine. However, it does mean less real estate when working with spreadsheets, reading emails, writing, or working in a painting app. Which may not be ideal for some users looking to switch from a PC.

iOS Growing Pains. iOS itself still needs some time to grow as well. Especially in split screen mode. When running a business it is essential that one can quickly compare multiple spreadsheets in Numbers or have multiple pages of Safari open at the same time. Right now, you can only have Numbers or Safari open in one panel at a time, not both. We'd like to be able to open 1 spreadsheet in each panel for quick cross-comparisons and easier workflow. This is another instance where we are forced to use a PC.

The iPad Pro 9.7 also lacks the "fast charging" feature of it's bigger brother and has a slight camera bump like the iPhone Plus does. Not necessarily bad things, but they are worth noting.

iPad Pro 9.7 Review: Summing It All Up

For iPad Air and iPad Mini users, the iPad Pro 9.7 is the iPad we have all been waiting for. It is much more powerful and, with the Smart Keyboard and Pencil, extremely versatile.

For most everyday PC users, the iPad Pro 9.7 would indeed be a suitable computer replacement that will take some adjustments at first but quickly becomes a true joy to use.

For current iPad Pro 12.9 users who don't need the extra screen space and find the larger size to be unwieldy then this is also a great option.

For hardcore computing professionals who need large amounts of computing power, large screen space, and/or quick transfer speeds, then this isn't the complete computer replacement you want. But then again, you nerds probably already knew that before you read this article. :) 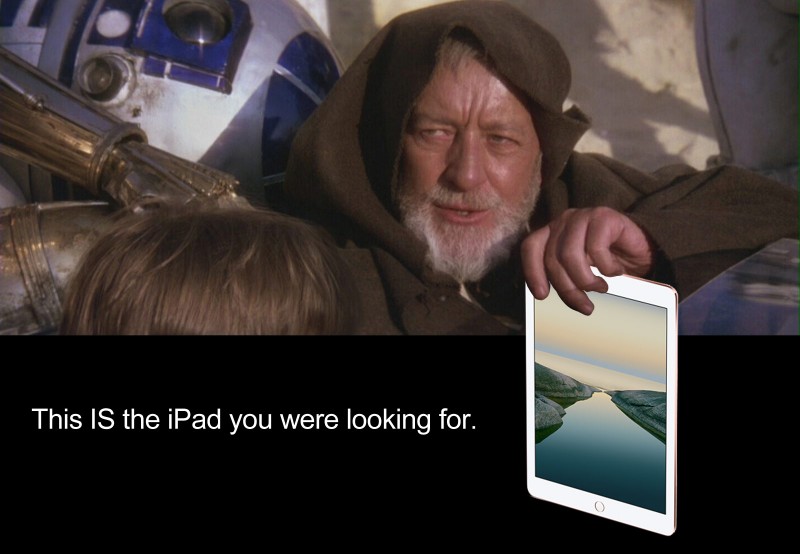