Growing Up In The PQ Family

As the daughter of entrepreneurs, I’ve grown up surrounded by Pad & Quill and the highs and lows that come with running an e-commerce business. I was there in the beginning when bumpers had to be cut by hand and Mr. PQ (aka my old man) finished cases in our backyard.

I also have gotten to watch the company grow into the success it has become today. Looking back, I never would have expected that my dad would have built a company with fine leather bags , gorgeous Baltic birch wooden iPad cases, and a standard of crafted excellence. It’s enough to want to treat yo' self!

However, the best part of being a member of the family that has grown out of Pad & Quill is the constant emphasis on seeing and hearing the worker. No idea is too small nor too big to be drawn out and considered. In Leon, Mexico, this emphasis continues with each employee signing the leather product they have produced.

In a time when you can order just about anything from the Internet, the people behind the product have been forgotten. Mr. and Mrs. PQ have pushed for the opposite. The advances of technology have met the artful beauty of crated excellence. And all the while the fingerprints that create the art have not been forgotten. 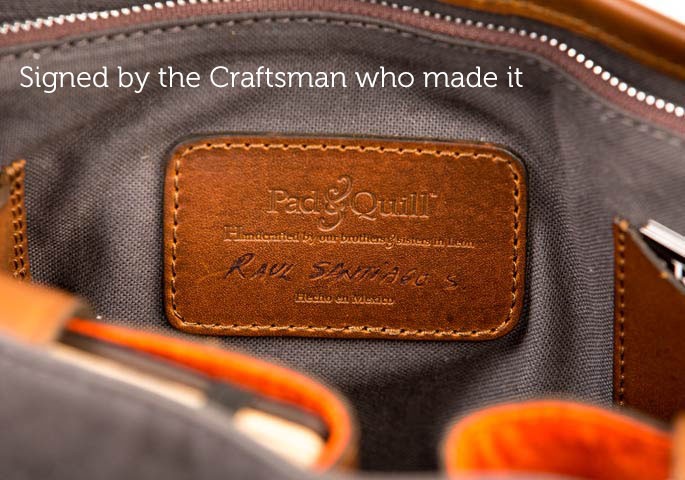 It’s this attention to even the smallest details that has made Pad & Quill stand out from the rest. By placing a signature on each leather good, it serves as a reminder of the work that went into the production and the worker behind the piece. Because, just a few years ago, in our humble beginnings little did we know the impact we would have. What started out in our basement and backyard has grown into a successful business with people from all over the United States and Mexico joining together to create beautiful, functional pieces of art. And that is something worth standing by.