Perhaps the two most well known words that follow "Happy Thanksgiving" are "Black Friday", the one day each year where retailers everywhere knock prices so low, thousands line up to shop in frenzied masses. But Apple has deal with Black Friday somewhat differently than its peers.

The vast majority of retailers slash the prices on their products, such as being able to get a camera or LED TV for half price. Part of the reason is an overstock of goods in warehouses that manufacturers and retailers want to unload, especially since the effects of the recession still haven't disappeared.

But the larger reason is that retailers use Black Friday as the official kick-off point for holiday shopping, by far the most profitable time of the year. They bank on quantity over the holidays, knowing that the volume of people will more than make up for reduced profits on individual items. But not Apple, as they've gone a different route. 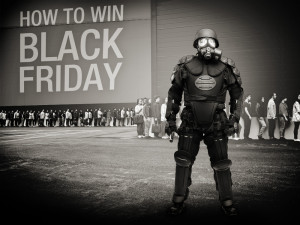 This year, Apple has made the decision that instead of lowering the prices of their merchandise, they would be offering gift cards based on the cost of each item. Gift cards were handed out totalling approximately 10-15% of the price, like up to $150 for a Mac, up to $75 for an iPad, and up to $50 for an iPod. Noticeably lacking were gift cards for iPhones and iPad Minis, with the latter just newly released.

According to insiders who have been tracking Apple's move, the decision was made because the company wants to maximize profits within its own stores. Instead of letting consumers keep more money in their wallets - that they could theoretically spend at other stores - Apple wants to keep money at their store. By giving out gift cards, they are, yes, sort of giving buyers a "discount", but one that can only be used again at Apple. And by issuing gift cards instead of discounts, they give themselves a much better chance of customer retention because that person will most likely come to an Apple store again. 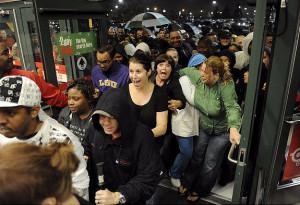 Here's the rub: not everyone in the world is being subjected to Apple's new Black Friday policy. While Americans, Canadians and Australians have no choice but to accept gift cards, shoppers in the UK, Germany and France still get to enjoy discounts. In the UK, for example, Apple buyers have enjoyed £81 ($132) off Macs, 10 percent off iPods, and savings on iPads starting from £31 for the new iPad Air.

Like it or hate it, it looks like Apple's Black Friday gift card policy is here to stay. And if you were one of the many who received a gift card instead of a discount, make sure you browse Pad and Quill's selection of everything Apple-related - with discounts instead of gift cards! - to keep your new purchases protected and looking good. Remember, we have a 30-day money back promise on everything.