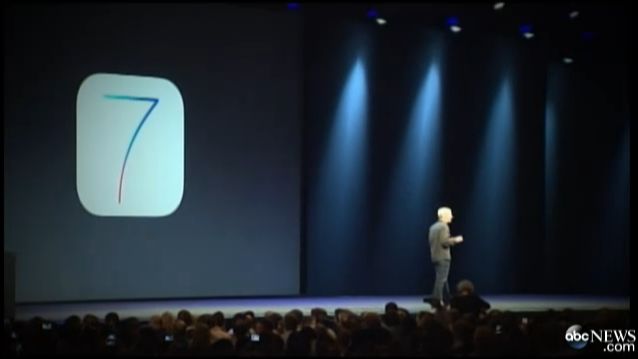 Rumors about a brand new operating system for Apple devices were confirmed yesterday when Apple unveiled the new iOS 7 at the Worldwide Developers Conference in San Francisco. The new software upgrade will make older Apple devices seem like new and put Apple back in the running with its competitors. Apple fans have long complained that the iOS needed a refresh in order to keep up with the rapid advance in technology and design.

As Tim Cook announced it, "The iOS 7 is the biggest change to iOS since the introduction of iPhone." The new iOS 7 interface is simple and clean, with an elegant design and flat icons, rather than the skeumorphic design that Apple is known for currently.

The iPhone 4 and newer models, iPad 2 and newer, iPad Mini, and 5th generation iPod Touch will all be available with the new iOS 7 starting in the fall of 2013. A beta version is available for developers to experiment with and work on developing new apps for the software.

New features on the iOS 7 include a notification center, Safari updates, upgrades to Siri, and the introduction of iTunes Radio. Similar to streaming services like Spotify and Pandora, iTunes Radio will allow listeners to stream music on-demand for free across all Apple products. For a small fee, users can opt out of ads. iTunes Radio will guide users to purchase their favorite songs on iTunes, with highly personalized recommendations for new songs and artists based on the user's listening preferences on iTunes Radio.

Airdrop is another new feature for iOS 7, which will allow users to swap files between Apple devices.

With more efficient multitasking for apps, longer battery life, and a control center that allows you to easily adjust the screen brightness or switch to Airplane mode, the new iOS 7 is expected to reignite the passion for Apple products and keep up with new software releases for Android, Windows, and other competitors.

Keep your iPhone protected with an iPhone case from Pad & Quill. Access to all features and ports, plus theft protection with an unassuming notebook-like appearance. Get free shipping when you order any other case or accessory!