Looking Back at the Best of 2013 for Apple

This past year we saw some really innovative material coming out of Apple's corner, from iOS 7 for iPhones to two new iPads. Here's a look back at the best that Apple produced in 2013.

iPhone users who'd bought the iPhone 4S waited with bated breath to see what the next trick up Apple's sleeve would be, and they weren't disappointed. On September 20, 2013, the two latest iPhones hit the market, each bringing their own distinct twist.

The iPhone 5s boasted an all aluminum-and-glass chassis, improving on the design of the 5 range that had a tendency to chip around the edges. A case would be necessary with the 5s, with no shortage of good-quality ones available. The weight was also an impressive factor, hardly tipping the scales at a barely noticeable 112g. But the hardware and performance is where the 5s really stood out, with this phone being the first to feature an A7 dual-core 64-bit processor paired with an M7 motion core processor. Putting such a powerful, yet little, engine under the hood resulted in the 5s being the fastest and most advanced iPhone yet. However, one major drawback of that was until developers started making apps that would optimize the A7 and M7 processors, the iPhone's true potential would have to wait to be realized.

This iPhone was a measure of Apple's ingenuity and willingness to do whatever it took to stay in the market, as they're not exactly known for releasing "junior" versions of the same product. But manufactured with a polycarbonate casing that came in a variety of bright colors, and featuring an A6 processor instead of an A7, it was a less expensive - not cheaper - version of its older sibling. It also didn't come with the fingerprint ID recognition that the was de rigueur for the 5s, but that's a minor point.

Finally, a software update that actually improved the iPhone instead of only purporting to do so. iOS 7 gave us a control panel and notification center accessible from the locked screen, a really handy feature that saved precious time. It also heightened security features (always a plus), gave you a time stamp on every single text message and iMessage, and let you see a preview of apps in the multitasking bar. Oh yeah, and the shadowy design was knock-your-socks off better than any of the previous software updates. 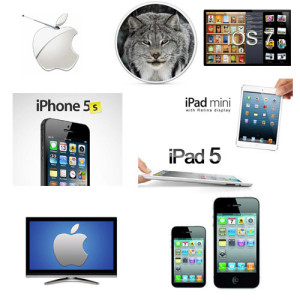 Billed as the thinnest, lightest iPad yet, the Air had a 43% lighter bezel and was 28% lighter in total. It also contained the hugely successful A7 chip, making the perfect home for such a high-performing processor. But perhaps the most impressive feature of the Air was its Retina Display, essentially doubling the screen quality from its predecessor.

Although the Air definitely wow, it was the iPad Mini that really had critics talking. It can fit in the palm of your hand, but it's no larger-than-average sized iPhone, it's all iPad, from its heart to its soul. The 7" screen disguises the fact that Apple packed a lot into the Mini, loading it with features but still keeping it lightning-fast in its responsiveness. And while it doesn't have the Retina Display that the Air does, it almost doesn't matter: the Mini, pound for pound, packs a mighty punch.

Although there are a ton more highlights from Apple this past year, it'd be impossible to fit them all in. But while you come up with your own list of the best things Apple came out with in 2013, make sure the device you're googling them on is covered in a Pad and Quill case. Have it shipped anywhere in the world in only a few days, 24-hour shipping available if you just can't wait.